Sana Askari is a Pakistani actress and model. She is known for the television work on series such as Dareecha, Dolly ki Ayegi Baraat, Azar Ki Ayegi Baraat, Takkay ki Ayegi Baraat, Annie Ki Ayegi Baraat, Woh Dobara, Khushboo Ka Ghar, Ladies Park, Main Abdul Qadir Hoon, and Daagh. She has appeared as a guest-star in Nadia Khan Show, Jago Pakistan Jago, and Good Morning Pakistan. She was a contestant on Fear Factor Pakistan, in which she was eliminated. Born on April 23, 1988 in Karachi, Pakistan, she attended Beaconhouse School. She graduated from the National Academy of Performing Arts (NAPA) in 2010. She has been married to Minhaj Ali. She has a son, Rayan Askari. 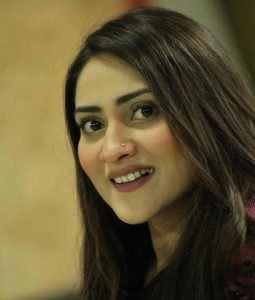 Sana Askari Facts:
*She was born on April 23, 1988 in Karachi, Pakistan.
*She graduated from NAPA in 2010.
*She appeared as a contestant in Fear Factor Pakistan, but was ultimately eliminated.
*Follow her on Facebook and Instagram.