Aashka Goradia is an Indian television actress popularly known for her role of Kumud in Kkusum, Kallavati in Laagi Tujhse Lagan and Dheer Bai Bhatiyani in Bharat Ka Veer Putra – Maharana Pratap. She has also appeared in the television series Baal Veer, Sinndoor Tere Naam Ka, Virrudh, Naagin, and Naagin 2. She was a contestant on Nach Baliye, Fear Factor: Khatron Ke Khiladi Torchaar 4, and Bigg Boss. In 2010, she appeared in a special episode of Kaun Banega Crorepati 4, hosted by Amitabh Bachchan. Born on November 27, 1985 in Ahmedabad, India, she was educated at St Louis School in Ahmedabad. She began her career appearing in the shows like Sony TV’s Achanak 37 Saal Baad and comedy sitcom Acting Acting. She was in a relationship with television actor Rohit Bakshi from 2006 to 2015. She married Brent Goble, a businessman by profession in December 2017. 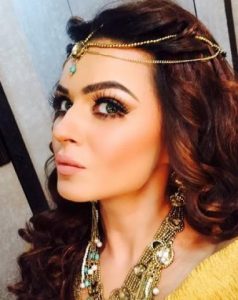 Aashka Goradia Facts:
*She was born on November 27, 1985 in Ahmedabad, India.
*She began her career as a translator in a marketing firm.
*She has walked the ramp in several fashion events.
*In 2012, she participated in Bigg Boss 6.
*She is a vegetarian.
*She has two pets, a Turkish Angora cat Narcy and a Labrador Romeo.
*Follow her on Twitter, Facebook and Instagram.