Sara Errani is an Italian professional tennis player who achieved her career’s best ranking on May 20, 2013, which was #5. Having won multiple titles on clay, she is widely known as a clay-court specialist. Turning professional in 2002, she has won nine career singles titles, and 25 career doubles titles, including five Grand Slam doubles championships and five Premier Mandatory/Premier 5 titles. Sara was born on April 29, 1987 in Bologna, Emilia-Romagna, Italy. She is the daughter of Giorgio, a fruit and vegetable seller and Fulvia, a pharmacist, and sister to Davide Errani. 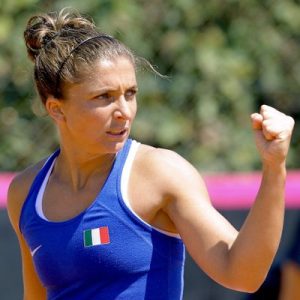