Sara Rue is an American actress of film and television. She is best known for her portrayal of Carmen Ferrara on the WB Network dramedy series Popular, and for her role as Claudia Casey on the ABC sitcom Less than Perfect. She is also known for her roles as Brenda in the comedy Rules of Engagement, Kim in the short-lived ABC sitcom Malibu Country, Dora Winston in the TV Land comedy series Impastor, and as Olivia Caliban in the second season of A Series of Unfortunate Events. Her well-known films include Gypsy 83, The Ring, Danny Roane: First Time Director, For Christ’s Sake, Miss Dial, and A Slipping-Down Life. Rue hosted The CW reality series Shedding for the Wedding in 2011. She began recurring on ABC’s American Housewife in 2017, playing Nancy Granville. Born Sara Forbes Schlackman on January 26, 1979 in New York City, New York, to parents Joan and Marc Schlackman, she has one younger sister named Leah. Rue began her acting career at the age of nine, playing Kevin Spacey’s daughter in the 1988 film Rocket Gibraltar. In 2001, Rue married Film director Mischa Livingstone, and they divorced in 2007. She then married teacher Kevin Price on May 21, 2011. They have two daughters named Talulah and Adelaide. 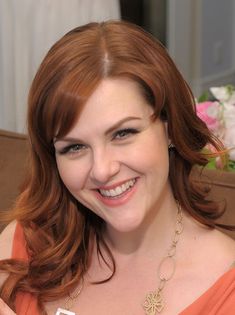 Sara Rue Facts:
*She was born on January 26, 1979 in New York City, New York, USA.
*Her ancestry includes Ashkenazi Jewish, English, and some Scottish.
*She has been working as an actor since she was nine years old.
*She enjoys gardening.
*She and her ex-husband (Mischa Livingstone) were avid poker players.
*Follow her on Twitter and Instagram.