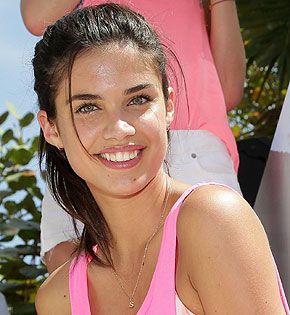 Born Sara Pinto Sampaio on July 21, 1991 in Porto, Portugal, to parents Cristina and Armando Sampaio, she has a brother named André. Sampaio rose to fame after winning the Cabelos Pantene 2007 competition. From August 2013 to 2014, Sampaio dated American singer, Alex DeLeon. She began dating Olivier Ripley in 2017.

Sara Sampaio Facts:
*She was born on July 21, 1991 in Porto, Portugal.
*She was first discovered at the age of 15, though she was not allowed to compete in modeling competitions until the age of 16.
*At the age of 16, she won a hair modeling contest in Portugal called Cabelos Pantene 2007.
*She won Portuguese Golden Globe Awards for Best Female Model five times from 2011 to 2016.
*She became an official Victoria’s Secret Angel in April of 2015.
*In 2015, Maxim honored the 20th anniversary of the brand Victoria’s Secret and included her on the list “The 20 Most beautiful Angels of All time”.
*She has a pet dog named Luigi.
*Follow her on Twitter, Facebook and Instagram.