Sarah Hyland is an American actress of television and film. She is best known for playing the role of Haley Dunphy on the ABC sitcom Modern Family since 2009, for which she was nominated for a Critics’ Choice Television Award for Best Comedy Supporting Actress in 2013. Her other television credits include All My Children, Lipstick Jungle, One Life to Live, and Shadowhunters. In addition to her television appearances, she has also acted in a number of films, including Geek Charming, Struck by Lightning, Scary Movie 5, April Apocalypse, Vampire Academy, XOXO and Dirty Dancing. Born Sarah Jane Hyland on November 24, 1990, in Manhattan, New York, she is the daughter of actors Melissa Canardo and Edward James Hyland, and older sister to actor Ian Hyland. She belongs to English, German, Scottish, Irish, Dutch and Welsh descent. She attended Professional Performing Arts School in Manhattan, USA. She has been acting since she was five years old. Her first role was as Howard Stern’s daughter in Private Parts. In 2017, she began dating reality TV personality and Radio DJ, Wells Adams. She was previously in a relationship with Matt Prokop from 2009 to 2014, and with English actor Dominic Sherwood from 2015 to 2017. 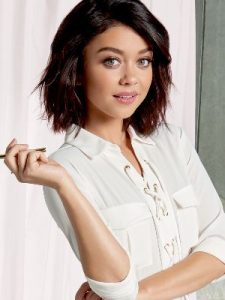 Sarah Hyland Facts:
*She was born on November 24, 1990, in Manhattan, New York.
*She is the daughter of Melissa Canaday and Edward James Hyland.
*She appears as the oldest sibling Haley Dunphy on the ABC sitcom Modern Family.
*She appeared in Nintendo 3DS ad campaign along with Dianna Agron and Gabby Douglas.
*She was in a long term relationship with Matt Prokop from 2009 to 2014.
*Follow her on Twitter, Facebook and Instagram.