Lena Gercke is a German fashion model and television host who won the first cycle (season) of Germany’s Next Topmodel. She was the host of Austria’s Next Topmodel for the first four cycles. In 2013, she became a judge of Das Supertalent, a German talent show. She has advertised for many brands such as Burger King, Fredericks of Hollywood, Gant, Geox, Gillette, H&M, Audi, Basler, Boss Green, Buckle, Heine, Henry Laurel, Lloyd, Karstadt, Katjes, Mexx, Next, Opel, Oui Set, Peruvian Connection, Sinn Leffers, Super Suite Seventy Seven, Vera Bradley, and Windows Live. Born Lena Johanna Gercke on February 29, 1988 in Marburg, Germany, to parents Elvira and Uwe Gercke, she grew up in Cloppenburg, with a sister and two half-sisters. She attended the Liebfrauenschule Cloppenburg, a Roman Catholic gymnasium, completing her abitur in 2007. She started her modeling career appearing in a Burger King commercial. Gercke dated German footballer Sami Khedira from 2011 to 2015. She was previously in a relationship with British singer Jay Khan from 2007 to 2009. 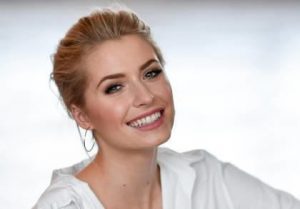 Lena Gercke Facts:
*She was born on February 29, 1988 in Marburg, Hesse, Germany.
*She hosted the first four cycles of Austria’s Next Topmodel.
*She likes to play chess in her free time.
*Visit her official website: www.lena-gercke.de
*Follow her on Facebook and Instagram.