Sarah Wright is an American actress and former fashion model. She is known for her role as Paige Chase in the sitcom Quintuplets, as Jane in the CW series 7th Heaven, as Tiffany McDermott in the CBS mid-season replacement comedy series Mad Love, as Millicent Gergich on the NBC show Parks and Recreation and as Ken Marino in the short-lived NBC sitcom Marry Me. She has also played prominent roles in the films Touchback, 21 & Over, Walk of Shame, and American Made. Born Sarah Fay Wright on September 28, 1983 in Louisville, Kentucky, to parents Debbie and Robert Wright, she has one younger brother named Samuel. She started modeling at the age of 14. She attended Seneca High School in Kentucky and moved to Louisville to finish her high school career. She has been married to actor Eric Christian Olsen since June 23, 2012. They have two children. She was previously married to A. J. Mason. 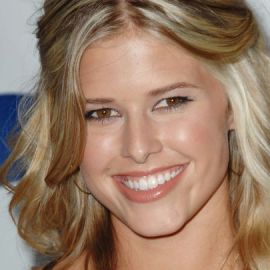 Sarah Wright Facts:
*She was born in Louisville, Kentucky on September 28, 1983.
*Began modeling at age 14.
*She was discovered by organizers from the 1999 Mossimo model search contest.
*Follow her on Twitter and Instagram.