Sasha Alexander, born May 17, 1973, is a Serbian-American actress who became an established actress, appearing on the series NCIS and Rizzoli & Isles. She has also appeared on Dawson’s Creek, Yes Man, Mission: Impossible III, and He’s Just Not That Into You. Sasha was born in Los Angeles, California as Suzana S. Drobnjakovic. Her parents are both of Serbian descent. She has a brother named Alexander. Sasha is married to Italian director Edoardo Ponti. They have two children, a daughter named Lucia Sofia and a son named Leonardo Fortunato. She was previously married to Luka Pecel. 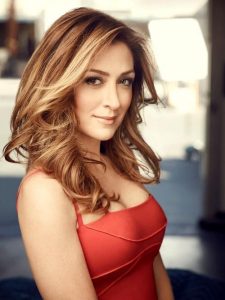 Sasha Alexander Education:
*She graduated from University of Southern California‘s School of Cinema-Television.

Sasha Alexander Facts:
*She has ethnic Serbian descent on both her parents side.
*Her role model is her mom.
*She speaks English, Italian and Serbian.
*She used to be a dancer.
*She won 2016 People’s Choice Awards for Favorite Cable TV Actress.
*She was in a pop music group for a year called Everything Nice when she was 14.
*Follow Sasha on Twitter, Facebook and Instagram.