Steve Buscemi, born December 13, 1957, is an American actor, director and writer who has starred in films such as Ghost World, The Grey Zone, The Big Lebowski, Con Air, Spy Kids 2, The Sopranos, Big Fish, Armageddon, Desperado, and Reservoir Dogs. Apart from acting in films, he has directed numerous episodes of TV shows, including Homicide: Life on the Street, Nurse Jackie, The Sopranos, Oz, and 30 Rock. He was born Steven Vincent Buscemi to Dorothy and John Buscemi in Brooklyn, New York. His ancestry includes Italian, English, Dutch, and Irish, and was raised as a staunch Roman Catholic. He has been married to director Jo Andres since 1987. They have one son, Lucian Buscemi. 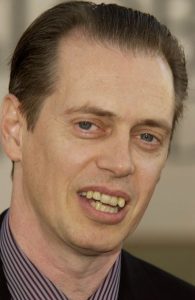 Steve Buscemi Facts:
*He belongs to Italian, English, Dutch, and Irish descent.
*He is one of the most prolific of today’s actors, often starring in about 5 films a year.
*He was named number #52 on Empire (UK) magazine’s “The Top 100 Movie Stars of All Time” list.
*He went to a Catholic school.