Sasha Grey was born Marina Ann Hantzis on March 14, 1988 in Sacramento, California, USA. She had a recurring role on the 2010 season of the hit HBO series Entourage. Her father (Greek-American) was a mechanic and her mother (English, Irish and Polish descent) worked for the state of California. Grey has a perfect body which measures breast 34, waist 26 and hip 35. She has a height of 5 feet and 6 inches which is around 168 cm. 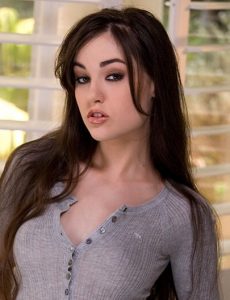 Sasha Grey Facts:
*She has Greek, English, Polish, Irish, and Scottish ancestry.
*She announced her retirement from ad*lt films on her official page on Facebook on April 8, 2011.
*She was formerly in a relationship with aTelecine member Ian Preston Cinnamon from 2009 to 2014.
*Follow her on Twitter, Facebook and Instagram.