Singer Leona Lewis was born Leona Louise Lewis on April 3, 1985 in London Borough of Islington, London, the daughter of Maria and Aural Josiah Lewis. She was raised in the London Borough of Islington, where she attended the BRIT School for Performing Arts and Technology. She started writing music when she was 12. She has two brothers named Bradley and Kyle. Her single “Bleeding Love” reached #1 in over thirty countries around the world. She is with the height 5 feet 7 inches in tall. She wears a size 7.5 shoe and her zodiac sign is Aries. 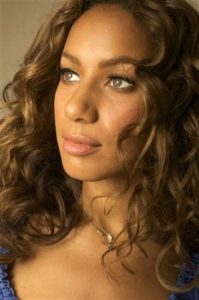 Leona Lewis Facts:
*Her single “Bleeding Love” reached #1 in over thirty countries around the world.
*She became a vegetarian at age 12 and eventually became a vegan in 2012.
*She plays the guitar and piano.
*Follow her on Twitter, Facebook and Instagram.