Saweetie is an American rapper, songwriter, and designer. She became known for her debut single, “Icy Grl.” She was signed to Warner Bros. Records in early 2018. On March 16 2018, she released her first major label EP, High Maintenance. Born Diamonté Harper in Santa Clara, CA, on July 3, 1993, to a Filipino and Chinese mother and African American father, she later relocated to Sacramento to complete high school. She has twin sisters, Maya and Milan. She began writing music when she was 14 years old. She transferred from San Diego State to the University of Southern California, where she studied communications with a focus on business. 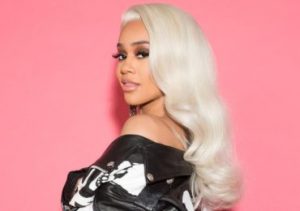 Saweetie Facts:
*Her mother is of Filipino and Chinese descent, and her father is African American.
*She got her name Saweetie from her grandmother.
*Her cousin is award-winning record producer Zaytoven.
*She released her breakout song ‘Icy Grl’ in 2017.
*She grew up listening to East Coast and West Coast rappers such as Bad Boy, Lil’ Kim, The Notorious B.I.G.. Foxy Brown, and Tupac Shakur.
*She credites Nicki Minaj as her big influence.
*She sold a line of hats online from a collection called The Money Club.
*Visit her official website: www.saweetieofficial.com
*Follow her on Twitter, SoundCloud, YouTube, Facebook and Instagram.