Sean Hayes is an American actor born in Glen Ellyn, Illinois. He is most famous for his portrayal of Jack McFarland on the NBC sitcom Will & Grace. His other notable film credits include The Bucket List, Cats & Dogs, Pieces of April, Win a Date with Tad Hamilton!, The Cat in the Hat, and The Three Stooges. Born Sean Patrick Hayes in Glen Ellyn, Illinois, he is the son of Mary, the director of a non-profit food bank, and Ronald Hayes, a lithographer. He belongs to Irish descent. He was raised as a Roman Catholic. He has four siblings. In 2014, he married Scott Icenogle after being in a relationship for eight years. 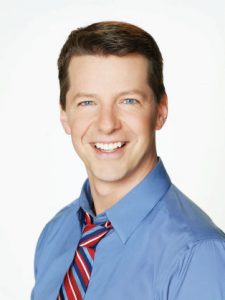 Sean Hayes Facts:
*He is of Irish descent
*He has four older siblings.
*In 2001, he saved a man’s life after he was shot and robbed.
*Currently, he resides in Los Angeles.
*Follow him on Twitter, Facebook and Instagram.

“They might have a long way to go before truly accepting gay people into their lives, but they have accepted the show into their living rooms each and every week.” – Sean Hayes