Selena Quintanilla was an American singer, songwriter, spokesperson, actress, model, and fashion designer who gained international fame as a member of Selena y Los Dinos and for her subsequent solo career in both Spanish and English. She was known as the “Queen of Tejano Music” and was also known as the “Mexican Madonna”. Her song, “Dreaming of You” peaked at number 22 on the Hot 100 charts. Selena’s other notable hit songs include “Siempre Hace Frio”, “Como La Flor”, “Que Creias”, “Amor Prohibido”, “Baila Esta Cumbia”, “No Me Queda Mas”, “Missing My Baby”, “No Quiero Saber”, “No Debes Jugar”, and “Bidi Bidi Bom Bom”. In 1994, she won a Grammy Award for Best Mexican/American Album for Live!. Born on April 16, 1971 in Lake Jackson, Texas, Selena was the youngest child of the Quintanilla family. She made her debut on the music scene in 1980 as a member of the band Selena y Los Dinos. In April 1992, she married Chris Perez. In 1995, she was murdered by Yolanda Saldivar, the former president of her fan club. 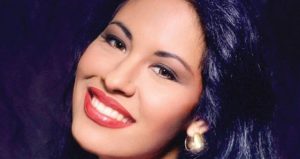 Selena Quintanilla Facts:
*She was born on April 16, 1971 in Lake Jackson, Texas, USA.
*Her father, Abraham Quintanilla, was a former musician.
*She was introduced to the music industry by her father.
*She released her first LP record at the age of 12 with her Selena y Los Dinos band.
*She had two boutiques, one in Corpus Christi and one in San Antonio.
*On March 31, 1995, she was shot and killed in Corpus Christi, Texas. She was 23 years old.
*Selena was working on her debut English album at the time she was killed.
*Jennifer Lopez was cast as Selena in a 1997 biopic film about her life and achieved fame after the film’s release.
*Selena Gomez was named after her.
*Her greatest influences were Madonna, Donna Summer, Michael Jackson, Paula Abdul, Janet Jackson and Gloria Estefan.