American actor Seth Green is best known for his performances as Scott Evil (Dr. Evil’s son) in Austin Powers movies and as Oz on Buffy the Vampire Slayer. He is the recipient of multiple Emmy Awards for creating and producing the television show Robot Chicken. He has also done voice work in Rat Race, Without a Paddle, Greg the Bunny, Family Guy, and The X-Files. One of his first film roles was 1984’s The Hotel New Hampshire, which starred Jodie Foster and Rob Lowe. Born Seth Benjamin Green on February 8, 1974 in Overbrook Park, Philadelphia, Pennsylvania, USA, to Jewish parents, he is the son of Barbara Gesshel and Herb Green, and younger brother to Kaela Green. He has been married to actress Clare Grant since May 2010. 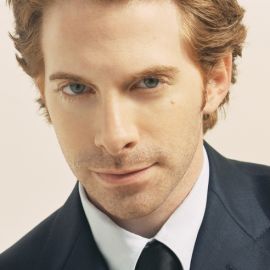 Seth Green Education:
He graduated from high school with honors.

Seth Green Facts:
*He is of Scottish, Russian and Polish descent.
*Both of his parents are Jewish.
*He was only seven when he began acting.
*In 2004, he was ranked #7 of the Top Ten Sexiest Men of the Buffy / Angel universe in a fan poll by the Buffy the Vampire Slayer fanzine.
*Visit his official website: www.sethgreen.com
*Follow him on Twitter, Facebook and Instagram.