Taeyeon is a South Korean singer. She is best known as the leader of South Korean girl group “Girls’ Generation”, whose hit songs include ‘Kissing You’, ‘Into the New World’ and ‘Run Devil Run’. Alongside her in Girls’ Generation are Yoona, Tiffany, Yuri, Sunny, Seohyun, Hyoyeon, Sooyoung and Jessica. She made her musical debut as the main role Kaoru in “Midnight Sun”, based on the Japanese novel Taiyō no Uta (2010). She hosted radio show Chin Chin Radio from 2008 to 2010. As a solo artist, Taeyeon is the recipient of several accolades, including four Golden Disc Awards, two Mnet Asian Music Awards, two Seoul Music Awards, two Seoul International Drama Awards, one Mnet 20’s Choice Award, one Melon Music Award, one Cyworld Digital Music Award, and one Gaon Chart Music Award. Born Kim Tae-Yeon on March 9, 1989 in Jeonju, South Korea, to Kim Hee-ja and Kim Jong-gu, Taeyeon has an older brother and a younger sister. She attended Jeonju Art High School, aspiring to become a singer. She dated Baek-Hyun Byun of the K-Pop group Exo from 2014 until 2015. 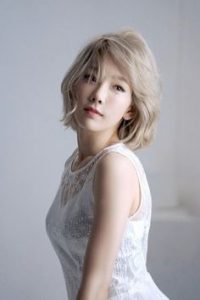 Taeyeon Facts:
*She is the middle of three children.
*Her favorite superhero is Iron Man.
*She is allergic to nuts.
*She speaks Korean, English and Japanese.
*Follow her on Facebook and Instagram.