Shannen Doherty is an American actress, producer, author, and television director, best known by the public for her roles as Brenda Walsh in Beverly Hills, 90210, as Heather Duke in Heathers, and as Prue Halliwell in Charmed. For her role in Beverly Hills, 90210, she won a 1993 Young Artist Award. She was also nominated for Saturn Awards for her performance in Charmed in 1999 and 2000. She has also done voice work in the animated fantasy adventure drama film The Secret of NIMH. Born as Shannen Maria Doherty on April 12, 19741 in Memphis, Tennessee, to Rosa Elizabeth Doherty and ohn Thomas Doherty Jr., she was raised in her mother’s Southern Baptist denomination alongside her older brother, Sean. She debuted as Bluebird in the 1982 comedy film, Night Shift. She was married three times. 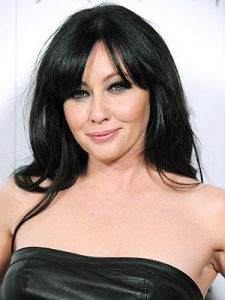 Books: Badass: A Hard-earned Guide to Living Life with Style and (the Right) Attitude

Shannen Doherty Facts:
*She grew up in her mother’s Southern Baptist denomination.
*She is a Republican.
*She supports the Sea Shepherd Conservation Society.
*She has three dogs and four horses.
*She is allergic to chocolate and wool.
*She is close friend of actress Sarah Michelle Gellar.
*Her hobbies are horseback riding, cooking, playing video games, and playing the guitar.
*As a teenager, her acting mentor was Wilford Brimley.
*Follow her on Twitter, Facebook and Instagram.