Shannon Elizabeth is an American film and television actress and former fashion model. She is most famous for her portrayal of Nadia in the 1999 comedy film American Pie, for which she became the ultimate sex symbol in the US. Other popular films Elizabeth has acted in are Scary Movie, Thirteen Ghosts, Jay And Silent Bob Strike Back, Love Actually, Night of the Demons, and Jack Frost. Her well-known television credits include That ’70s Show, The Twilight Zone and Cuts. She was a contestant on the sixth season of Dancing with the Stars. In 2018, she appeared on Celebrity Big Brother. Born Shannon Elizabeth Fadal on September 7, 1973 in Houston, Texas, she is the only child of Patricia Diane and Gerald Edward Fadal. She is of Syrian descent on her father’s side, and of German, English and Irish descent on her mother’s side. She was raised in Waco, Texas, and is a 1991 graduate of Waco High School. In high school, she was a member of the tennis team, and considered becoming a professional tennis player at one point in her life. She worked as a model for Ford & Elite models before she took up acting. She posed for Playboy magazine in 1997 and 1998 and says it’s one of her “biggest regrets!”. Shannon was married to actor Joseph D. Reitman from 2002 to 2005. She was once in a relationship with dancer Derek Hough. In 2014, she began dating Russell Simmons. 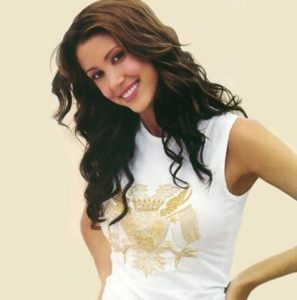 Shannon Elizabeth Facts:
*She was born in Houston, Texas and Grew up in Waco, Texas.
*While growing up, she trained ballet, tap, jazz and dance.
*She was active in cheerleading, dance team, and the student council while in high school.
*She is a vegetarian.
*She is a big fan of the Boston Red Sox.
*Gary Oldman is her favorite actor and Michelle Pfeiffer is her favorite actress
*She was named #29 on the Maxim magazine Hot 100 of 2008 list.
*Her cousin Tamsen Fadal is a New York-based television host.
*She owns a jewelry line called “Shansen Jewelry” along with her cousin Tamsen Fadal.
*She is an environmentalist and vegan.
*Visit her official website: www.shannonelizabeth.com
*Follow her on Twitter, Facebook and Instagram.