Vida Guerra is a Cuban-American glamour model, who achieved recognition after appearing in FHM magazine in 2002. She became “FHM’s Model of the Year” in 2004. In 2006, she posed for Playboy magazine. She has also appeared in photo shoots for various magazines, including DUB, Escape, Smooth, and Open Your Eyes. She was also featured in a variety of music videos such as “Obsession,” “Shake Ya Tailfeather” and Kanye West’s “The New Workout Plan.” She had a role in the 2003 short comedy film Writer’s Block as Muse. Born on March 19, 1974 in Havana, Cuba, she moved to the United States at an early age. She belongs to Spanish and Afro-Cuban descent. While growing up in Jersey, she modeled swimwear in several local fashion shows. She had a fling with NFL tight end Jeremy Shockey in 2006. 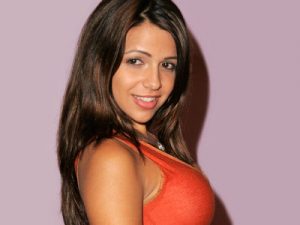 Vida Guerra Facts:
*She was born on March 19, 1974 in Havana, Cuba.
*She was introduced to the world in a 2002 FHM photo shoot.
*She was in the music video of Kanye West’s “The New Workout Plan”.
*She is a vegetarian.
*In 2005, she was placed at #26 in the list of ‘100 Sexiest Women in the World’ by FHM.
*In 2006, she ranked #21 in FHM magazine’s “100 Sexiest Women in the World 2006” supplement.
*She appeared nude in a campaign for PETA, in support of vegetarianism in 2011.
*She used to work as a loans officer before getting her modelling break in FHM.
*She speaks Spanish and English fluently.
*Visit her official website: www.vidasworld.com
*Follow her on Twitter, Facebook and Instagram.