Canadian actress and model Shannon Tweed is the daughter of Louise Tweed and Donald Keith Tweed, who rose to stardom as Miss November 1981 for Playboy magazine. She was born in St. John’s, Newfoundland, Canada as Shannon Lee Tweed. She was raised on a mink ranch in Markland. She is one of seven children and has three sisters, including actress Tracy Tweed. In 1982, she began her movie career and also appeared in the soap opera Falcon Crest (1981). She became Playmate of the Year in 1982. She competed in beauty pageants and came in fourth place in the 1978 Miss Canada Pageant. She wears 36C bra size and weighs 128 pounds. © Celebrity Facts Check out all her measurements, including bra size, weight, height, and cup size. 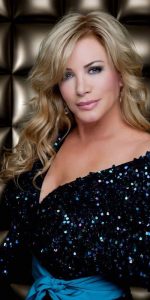