Sharon Stone is an American actress, producer, and former fashion model. She rose to international fame through her role of Catherine Tramell in erotic thriller Basic Instinct. She also played prominent roles in the films Casino, If These Walls Could Talk 2, Sliver, and Basic Instinct 2: Risk Addiction. For her performance in Casino, she won a Golden Globe Award. Born Sharon Yvonne Stone in Breckenridge, Minnesota, on March 10, 1958, to Dorothy and Joseph Stone, she has one older brother (Mike Stone), one younger brother (Patrick Stone), and a younger sister (Kelly Stone). She left school to become a fashion model in New York City. She was married to Michael Greenburg from 1984 to 1990 and Phil Bronstein from 1998 to 2004. She has three sons: Roan, Laird and Quinn. 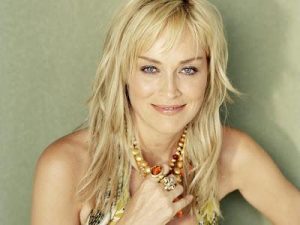 Sharon Stone Facts:
*She was born and raised in Meadville, Pennsylvania.
*She began her professional career as a model.
*She worked part-time as a McDonald’s countergirl as a teenager.
*She was nominated for the Academy Award for best actress for her role in Casino.
*She owns her own production company, Chaos.
*She speaks Italian fluently.
*One of Playboy Magazine’s “100 Sexiest Stars of the Century,” in the World (1999).
*In August 1995, Empire magazine ranked her #49 in their list of “100 Sexiest Stars in Film History”.
*Follow her on Twitter, Facebook and Instagram.