Shawn Mendes is a Canadian singer, songwriter and model. He first achieved fame in 2013, posting song covers on the video-sharing application Vine. Mendes released his first single “Life of the Party” in June 2014, and released his Island Records debut, The Shawn Mendes EP, in July 2014. He released his first official debut album, Handwritten, on April 14, 2015, via Island Records. Mendes’s hit songs include “Stitches”, “If I Can’t Have You”, “Señorita”, “Treat You Better” and “There’s Nothing Holdin’ Me Back”. Born Shawn Peter Raul Mendes on August 8, 1998 in Toronto, Canada, to parents Karen and Manuel Mendes, he has a younger sister named Aaliyah. He is of Portuguese descent on his father’s side, and of English descent on his mother’s side. He attended Pine Ridge Secondary School, and graduated in June 2016. Mendes got his start on Vine and later went on Magcon tour along with Cameron Dallas, Matthew Espinosa, Jack Johnson, Taylor Caniff, Nash Grier, Jack Gilinsky, Aaron Carpenter and Carter Reynolds. He has been in a relationship with Camila Cabello. 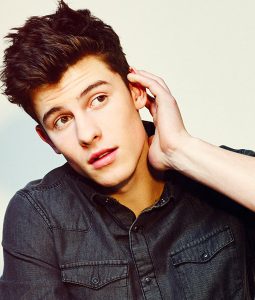 Shawn Mendes Facts:
*He was born on August 8, 1998 in Toronto, Canada.
*He belongs to both Portuguese and English descent.
*He grew up in Pickering, a suburb of Toronto.
*At school, Shawn played ice hockey and soccer, joined his high school glee club, and practised his stage presence in acting lessons.
*He created his YouTube channel in January 2011.
*His first single, Life of the Party, reached No. 24 on the Billboard 100.
*He won a Teen Choice Award for Most Popular Web Star in the music category in 2014.
*He collaborated with other artists, including Camila Cabello and Astrid S, to create the pop rock album.
*Visit his official website: www.shawnmendesofficial.com
*Follow him on Twitter, YouTube, Facebook and Instagram.