Shawnee Smith is an American actress and singer, best known for her portrayal of Amanda Young in the Saw horror film franchise, and for her role as Linda in the CBS sitcom Becker. From 2012 to 2014, Smith starred as Jennifer Goodson in the TV series Anger Management. Her other notable works include The Tom Show, Savannah Sunrise, Arsenio, Brand New Life, All Is Forgiven, The Blob, Grace Unplugged, and Believe. In addition to acting, Smith is also known for her work with the bands, Fydolla Ho and Smith & Pyle. Born Shawnee Rebecca Smith on July 3, 1969 in Orangeburg, South Carolina, to parents Patricia and James H. Smith, her parents divorced when she was age two, and her mother remarried when she was eight years old. Starting at age 8, Smith began her acting career in stage productions. She did her schooling from Ranchito Avenue Elementary School, Madison Jr. High School, and North Hollywood High School. She made her television debut in 1978 in a McDonald’s commercial titled “Best Friends”. Smith was married to Jason Reposar from 1998 to 2003 and Kai Mattoon from 2005 to 2006. She has three children. 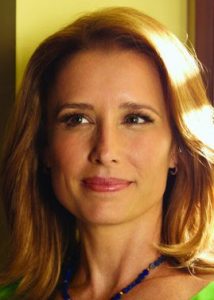 Shawnee Smith Facts:
*She was born on July 3, 1969 in Orangeburg, South Carolina, USA.
*Her ancestry includes English, German, Swiss-German, and Scots-Irish (Northern Irish).
*Her parents divorced when she was two years old.
*She is a tri-athlete.
*She is a registered Republican, and had endorsed Mitt Romney during the presidential election in 2012.