Sheilla Castro is a Brazilian volleyball player who won gold medals at the 2008 Summer Olympic Games, in Beijing, China, and in the 2012 Summer Olympic Games. She was named “Most Valuable Player” at the 2006 FIVB World Grand Prix in Reggio Calabria, Italy, and at the 2009 FIVB World Grand Prix in Tokyo, Japan. At the 2011 Pan-American Cup, she won the gold medal with her national team, and was given the “Most Valuable Player” award. Born on July 1, 1983 in Belo Horizonte, State of Minas Gerais, Brazil, her full name is Sheilla Tavares de Castro. She made her debut for the Brazilian national team against Colombia. In 2013, Sheilla married Brenno Blasioli. They have twin girls together. 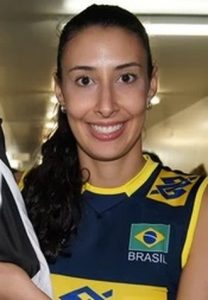 Sheilla Castro Facts:
*She was born on July 1, 1983 in Belo Horizonte, State of Minas Gerais, Brazil.
*She began playing at the club level in 1997.
*She plays as opposite in the Brazilian national team, and in Molico/Osasco.
*She won the Best Opposite Spiker in the FIVB World Grand Prix in 2016.
*She has earned more than half a dozen tournament MVP awards.
*She is married to Brenno Blasioli.
*Follow her on Twitter, Facebook and Instagram.