Jamaican international cricketer who plays for the West Indies cricket team. Sheldon Cottrell is a left-arm fast-medium bowler and a right-handed batsman. He was a part of the 2015 West Indies World Cup squad, and returned to the ODI side on 23 December 2017 against New Zealand after a 2-year absence. In April 2019, Cottrell was named in the West Indies’ squad for the 2019 Cricket World Cup. 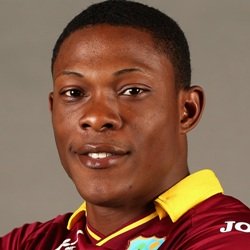 Sheldon Cottrell Facts:
*He was born on August 19, 1989 in Kingston, Jamaica.
*He made his T20I debut against England in March 2014.
*He made his One Day International debut for the West Indies against South Africa on January 25, 2015
*His favourite cricketers are Lasith Malinga and Wasim Akram.
*In the 2020 IPL auction, he was bought by the Kings XI Punjab ahead of the 2020 Indian Premier League.
*He is well known for saluting the pavilion after he takes a wicket.
*Visit his official website: www.sheldoncotterell.com
*Follow him on Twitter.