English actress and singer who rose to stardom with roles on sitcoms such as The Royle Family, Two Pints of Lager and a Packet of Crisps, Gavin & Stacey, and Benidorm. She has also starred in Jonathan Creek, Mrs Biggs, Cilla, Cleaning Up, The Further Adventures of Lucie Miller, The C Word, Black Work, The Moorside, Tower Block, Quartet, and The Huntsman: Winter’s War. Smith released her debut album, Sheridan, in 2017, followed by her second album, A Northern Soul in 2018. Born Sheridan Caroline Smith on June 25, 1981 in Epworth, North Lincolnshire, England, to parents Marilyn and Colin Smith, she studied dance at the Joyce Mason School of Dancing from an early age, and attended South Axholme Comprehensive School. She did her further education at John Leggott College in Scunthorpe. Smith became engaged to former insurance broker Jamie Horn on May 1, 2018 after just three months of dating. Together they have a son, Billy, born in May 2020. She was previously in a relationship with James Corden, Ross McCall, Graham Nation, Kirk Norcross, Reg Traviss, and Greg Wood. 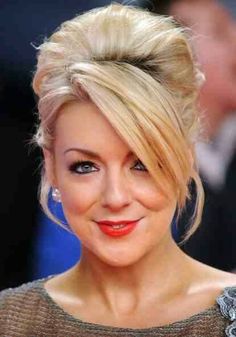 Sheridan Smith Facts:
*She was born on June 25, 1981 in Epworth, North Lincolnshire, England, UK.
*She lost her brother Julian at a young age.
*She was a member of the National Youth Music Theatre from 1995 to 2001.
*She was awarded the OBE (Officer of the Order of the British Empire) in the 2015 Queen’s New Year Honours List for her services to drama.
*She has three dogs.
*Visit her official website: www.sheridansmith.org
*Follow her on Twitter, Facebook and Instagram.