Shizuka Arakawa is a Japanese figure skater. She is the 2006 Olympic gold medalist and the 2004 World Champion. She is the first Asian to win a figure-skating gold and the first Japanese woman to win Olympic gold. Born on December 29, 1981 in Tokyo, Japan, to Sachi and Koichi Arakawa, she was raised in Sendai and its suburbs. She started figure skating at the age of five, and started ballet lessons when she was seven years old. She graduated from Waseda University in 2004 with a degree in education. She is married and has one daughter. 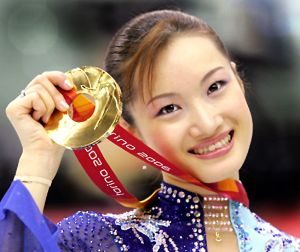 Shizuka Arakawa Facts:
*Born on December 29, 1981 in Tokyo, Japan, she is an only child of Sachi and Koichi Arakawa.
*She was named Shizuka after Shizuka Gozen.
*She won the 2004 World Championship.
*Her figure skating idols are Yuka Sato and Kristi Yamaguchi.
*She listens to music by Christina Aguilera, Beyoncé, EXILE and Mai Kuraki.
*She enjoys shopping, driving, swimming, golf and practicing marine sports.
*She retired from competitive skating after her Olympic victory, in 2006.
*She has four dogs, named Tiramisu, Choco, Aroma and Rosa.