Shruti Haasan is an Indian actress and singer, active primarily in Tamil, Telugu and Bollywood films. She made her acting debut as a child artist in the 2000 Tamil-Hindi film Hey Ram. Her first starring role was in Soham Shah’s 2009 Hindi film Luck. She then went on to earn notable roles in Anaganaga O Dheerudu, 7aum Arivu, 3, Race Gurram, and the 2015 Telugu Srimanthudu. In addition to acting, she is a singer and sung as a playback singer in many films including Thevar Magan, Chachi 420, Hey Ram, and Luck. She was born Shruti Rajalakshmi Hassan on January 28, 1986 in Chennai, Tamil Nadu, India to the prominent Haasan family. She is the daughter of veteran actors Kamal Haasan and Sarika Thakur, and older sister to actress Akshara Haasan. 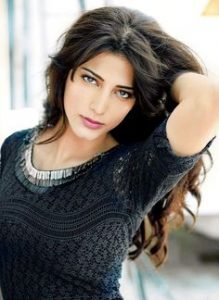 Shruti Haasan Facts:
*She is the daughter of veteran actors Kamal Haasan and Sarika Thakur.
*She became the lead singer of the rock band The Extramentals.
*Her hobbies include dancing, singing, reading, and writing.
*Follow her on Facebook, Twitter and Instagram.