Sia is an Australian singer, songwriter, voice actress, record producer and music video director whose notable hit songs include “Chandelier,” “Taken for Granted,” “Elastic Heart” and “Clap Your Hands.” Sia released her debut album, OnlySee, in 1997, followed by her second album, Healing Is Difficult, in 2001. This album included three singles: “Taken for Granted”, “Little Man” and “Drink to Get Drunk”. Sia’s collaboration with Flo Rida, “Wild Ones”, peaked at #5 on the Billboard Hot 100 and was the tenth best-selling song of 2012 globally. She won three ARIA Awards in 2010, including Best Independent Release, Best Video, and Best Pop Release. In 2018, she joined Diplo and Labrinth to form the supergroup LSD. Born Sia Kate Isobelle Furler on December 18, 1975 in Adelaide, Australia, to parents Phil Colson and Loene Furler, she is the cousin of musician Peter Furler. Sia was scouted by an Italian DJ while singing karaoke in a bar. She was married to Erik Lang from 2014 to 2016. 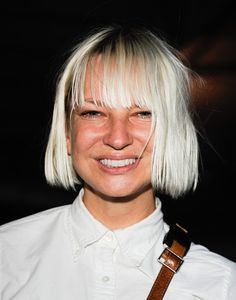 Sia Facts:
*She was born on December 18, 1975 in Adelaide, Australia.
*Her birth name is Sia Kate Isobelle Furler.
*Her grandfather, father, and uncle had worked as taxi drivers.
*She is the niece of Kevin Colson, Australian film and television actor.
*She began her career as a singer in the acid jazz band Crisp in the mid-1990s in Adelaide.
*She was a guest mentor on The Voice US in 2011.
*Her single, “Taken for Granted”, peaked at number 10 on the UK Singles Chart.
*She has a pet dog named Pantera.
*She is a vegan and had appeared in a PETA (People for the Ethical Treatment of Animals) Asia-Pacific with her pet dog to promote pet neutering.
*She has been diagnosed with bipolar disorder.
*She was appeared on the Christina Aguilera song “Blank Page.”
*The video for Sia’s 2017 single “The Greatest” was a pro-LGBT tribute to the 49 people killed in the Pulse Orlando Shooting.
*She is friends with Christina Aguilera, Elisha Cuthbert, Gwen Stefani, Katy Perry, Beyonce, and Girls’ Zosia Mamet.
*She is openly bisexual
*Visit her official website: www.siamusic.net
*Follow her on Twitter, YouTube, Facebook and Instagram.