Sibyl Buck is an American musician, yoga instructor, and former fashion model. Sibyl began modeling in 1992, and worked for Yves Saint-Laurent, Alexander McQueen, Chanel, Jean-Paul Gaultier, and many other fashion houses. She has appeared on the cover of fashion magazines such as Marie Claire, Elle, and American Vogue. After quitting the modeling industry in 1998, Sibyl pursued her career as a musician, and began playing rock music in bands. She played bass and sang in Champions of Sound with Chris Traynor of Orange 9mm and Helmet, and with Sergio Vega of Quicksand. In 2007, she recorded and performed with Joseph Arthur as a member of his backing band The Lonely Astronauts, appearing on his Let’s Just Be, Temporary People, and The Graduation Ceremony albums. Born on 27 May 1972, in Versailles, France, Sibyl’s was a teacher at the American school in Paris at the time, but he lost his job for being too radical for the French schooling system. The family moved to Virginia when Sibyl was just six weeks old. Sibyl left college in 1992, she moved to Paris to start modeling. She is currently a full-time yoga instructor and a mother. Her daughter, Puma Rose, appears to be following in her footsteps. 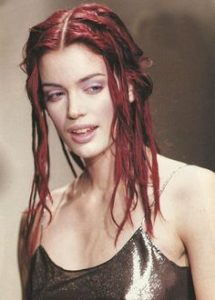 Sibyl Buck Facts:
*She was born in Versailles, France on 27 May 1972.
*She started her modeling career in 1992 and quit in 1998.
*She played bass guitar for Joseph Arthur and the Lonely Astronauts in 2007.
*In 2008, Sibyl moved to Topanga Canyon and became a full-time yoga instructor.
*Visit her official website: www.sibylbuck.com
*Follow her on Twitter and Instagram.