Sienna Miller is a British-American actress, model and fashion designer. She is best known for her roles in the films Layer Cake, Alfie, Factory Girl, Interview, Mississippi Grind, Stardust, Live by Night, American Sniper, High-Rise, The Lost City of Z, American Woman, Foxcatcher and G.I. Joe: The Rise of Cobra. In 2003, Miller played Fiona Bickerton on the short-lived Keen Eddie, and starred as Tippi Hedren in the television film The Girl, for which she was nominated for the BAFTA Television Award for Best Actress and the Golden Globe Award for Best Actress – Miniseries or Television Film. Her theater credits include As You Like It, After Miss Julie, Cabaret, and Cat on a Hot Tin Roof. Born Sienna Rose Diana Miller on December 28, 1981 in New York City, New York, to a South African mother and American father, she has a sister named Savannah, two half-brothers named Stephen and Charles, and a half-sister, Natasha. Miller attended and graduated from Heathfield School in Ascot, Berkshire, England, and studied drama at the Lee Strasberg Institute in New York City. She has dated Jude Law, DJ George Barker, Balthazar Getty, Tom Sturridge, and Lucas Zwirner. 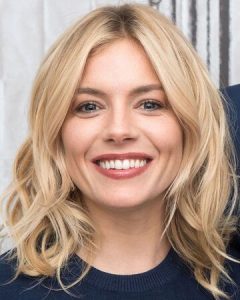