Sig Hansen is an American captain of the fishing vessel F/V Northwestern who has been featured in each season of the documentary television series Deadliest Catch since 2006. Born Sigurd Jonny Hansenon April 28, 1966 in Seattle, Washington, to parents Snefryd and Sverre Hansen, he has two younger brothers, Edgar and Norman. He started fishing with his father at age fourteen. He was educated at Shorewood High School. He is married to June Hansen with whom he has two adopted daughters, Nina and Mandy. He was previously married to Lisa Eckstrom. 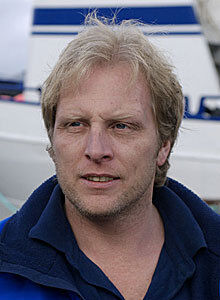 Sig Hansen Facts:
*He was born on April 28, 1966 in Seattle, Washington, USA.
*He was named after his grandfather, Sigurd.
*He is a fourth-generation Norwegian fisherman.
*He is the oldest of the three brothers.
*He is fluent in Norwegian.
*His grandfather and father invented opilio crab fishing in Alaska.
*He is the brother-in-law of Louise Hansen.
*He suffered a heart attack in March 2016.
*Visit his official website: www.fvnorthwestern.com
*Follow him on Twitter and Facebook.