Sigrid Agren is a French model, who gained international attention with her appearance in the 2006 Elite Model Look competition. She has modeled for numerous designers including Armani, Chanel, Dolce & Gabbana, Versace, Ralph Lauren, Jil Sander and Christian Dior. She has also appeared in numerous editorials for magazines like Vogue Paris, Numéro and Harper’s Bazaar. Born on April 24, 1991 in Martinique, France, to a French mother and a Swedish father, Agren studied ballet as a child. She entered the Elite Model Look contest as a teenager, and went on to the finals in Paris. She became famous during the Elite Model Look in the year 2006 at the age of 15. 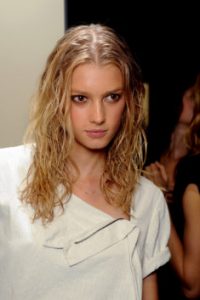 Sigrid Agren Education:
She was homeschooled.

Sigrid Agren Facts:
*She was born on April 24, 1991 in Martinique.
*She is the daughter of Swedish father, and French mother.
*She first participated in the Elite Model Look in France at 13.
*Her favorite subjects were the biology, physics, and mathematics.
*She is good friends with Taryn Davidson, Jennifer Messelier, and Toni Garrn.
*Follow her on Twitter, Tumblr, Facebook and Instagram.