Simone Thomalla is a German actress. She is best known for her roles in Tatort, Mona M – Mit den Waffen einer Frau, Frauenarzt Dr. Markus Merthin, Männer aus zweiter Hand, Das Phantom – Die Jagd nach Dagobert, and Das Recht auf meiner Seite. Thomalla won the Goldene Kamera together with Rudi Assauer for her Veltins commercial. In February 2010, Thomalla posed for the German edition of Playboy magazine. Born on April 11, 1965 in Leipzig, Germany, she is the daughter of art director Alfred Thomalla and a photo model, she grew up in Potsdam, then German Democratic Republic. She studied at the Hochschule für Schauspielkunst “Ernst Busch” acting school in Berlin. She made her film debut in 1982 as Thomalla Franziska Lammertin in the East German television film Abgefunden. She had a daughter Sophia Thomalla with André Vetter, whom she was married to from 1991 to 1995. She was in a relationship with German football manager Rudi Assauer from 2000 to 2009. Since 2009, she has been in a relationship with handball player Silvio Heinevetter. 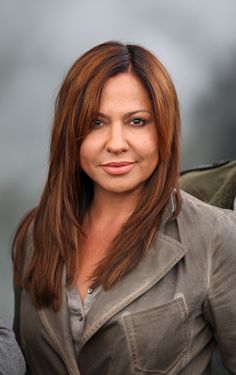 Simone Thomalla Facts:
*She was born on April 11, 1965 in Leipzig, Germany.
*She wanted to be a musician from childhood.
*She attended the School of Dramatic Arts “Ernst Busch” Berlin.
*She began her career with the 1982 East German television film Abgefunden.
*Played detective Eva Saalfeld in the German TV series Tatort.
*She appeared in the German edition of Playboy in the February 2010 issue.
*Visit her official website: www.simonethomalla.de
*Follow her on Twitter and Instagram.