Sinem Kobal is an actress and model from Istanbul, Turkey. She is known for her roles in television, such as Hurrem Sultan, Selena, Küçük Sırlar, and Arka Sokaklar, and in the films Romantik Komedi 2: Bekarlığa Veda, Romantic Comedy, Ayakta kal, Okul and You Have Burnt Me. She made her screen debut in the 2001 Turkish situation comedy titled Dadi. She has appeared in several television commercials in Turkey such as Gencturkcell and Bingo. Sinem was born on August 14, 1987 in Istanbul, Turkey. Her father was a civil engineer while her mother is a homemaker. She has a brother, Kerem. In August 2009, she began dating footballer Arda Turan. In 2010, they got engaged but split up in 2013. In 2016, she married actor Kenan İmirzalıoğlu. 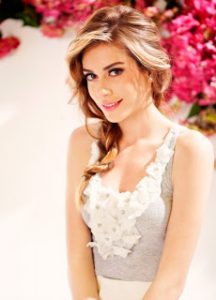 Sinem Kobal Facts:
*Her father was a civil engineer while her mother is a homemaker.
*She made her screen debut in the 2001 Turkish situation comedy titled Dadi.
*While in high school, she played in the volleyball team and won the second prize in a competition.
*Follow her on Twitter, Facebook and Instagram.