A talented performer, Timothy Olyphant is most famous for his two television roles as western lawmen; Sheriff Seth Bullock in Deadwood and Deputy U.S. Marshal Raylan Givens in Justified. Born as Timothy David Olyphant in Honolulu, Hawaii, Timothy is the son of Katherine Olyphant and John Vernon Bevan Olyphant, who worked as vice president of production at Gallo Winery. He has an older brother named Andy Olyphant, and a younger brother named Matt Olyphant. He has been married to Alexis Knief since 1991. Together they have three children: Grace, Henry, and Vivian. 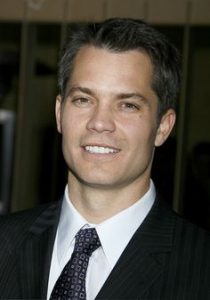 Timothy Olyphant Facts:
*He was born in Hawaii and raised in Modesto, California.
*He began competitively swimming at the age of 6 and was ranked in many championships.
*He was a U.S. National Finalist in swimming while attending the University of Southern California.
*Follow him on Facebook.