Skylar Astin is an American actor, voice actor, model and singer who originated the role of Georg Zirschnitz in the 2006 Broadway musical Spring Awakening and portrayed Jesse Swanson in the musical films Pitch Perfect and Pitch Perfect 2. Astin is also known for his roles in television, such as Ground Floor, Halt and Catch Fire, Graves, and Crazy Ex-Girlfriend, and in the films Hamlet 2, Cavemen, Taking Woodstock, and the 2013 21 & Over. He has also done voice work in Wreck-It Ralph (as Roy), Monkey Up (as Monty), Trolls: The Beat Goes On! (as Branch), and Vampirina (as Frankenstein). Born Skylar Astin Lipstein on September 23, 1987 in New York City, New York, to parents Meryl and Barry Lipstein, he was raised in New City, New York, in Rockland County. He has a sister named Brielle and two brothers named Jace and Milan. After graduating from Clarkstown High School North, he attended Stagedoor Manor performing arts summer camp. He also attended the Tisch School of the Arts at New York University. In 2016, he married his girlfriend of 3 years, Anna Camp. On April 19, 2019, they announced that they have amicably separated. 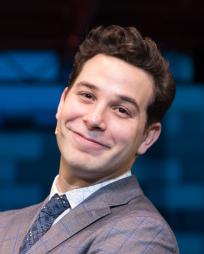 Skylar Astin Facts:
*He was born on September 23, 1987 in New York City, New York, USA.
*He started acting at the age of 14.
*He used to work in the deli of a natural foods store called Back To Earth in New City, New York.
*He plays the piano.
*He enjoys cooking.
*Follow him on Twitter, Facebook and Instagram.