Skylar Diggins-Smith is an American professional basketball player who currently plays for the Dallas Wings in the Women’s National Basketball Association. She was drafted third overall by the Tulsa Shock in the 2013 WNBA draft. She was an All-American each of her four years at Notre Dame, setting school records for career points, steals, and double-figure scoring games. She was appeared in the 2014 Sports Illustrated Swimsuit Issue, and has also appeared in Vogue magazine. Born Skylar Kierra Diggins on August 2, 1990 in South Bend, Indiana, USA to Renee Scott and Tige Diggins, she has one younger sister Hanneaf, and three younger brothers Tige, Destyn, and Maurice. She was engaged to her longtime boyfriend Daniel Smith in June 2016. They married on May 2, 2017. 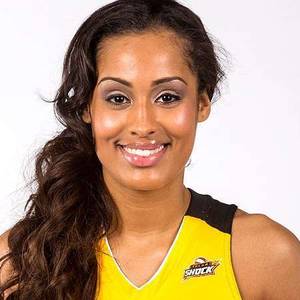 Skylar Diggins Smith Facts:
*She was born in South Bend, Indiana to Tige Diggins and Renee Scott.
*While growing up, she played softball.
*She was named Indiana’s Miss Basketball in 2009.
*She signed with Jay-Z’s Roc Nation Sports in 2013.
*She was named the WNBA’s Most Improved Player in 2014.
*Visit her official website: www.officialskylardiggins.com
*Follow her on Twitter, Facebook and Instagram.