Mini Bio: Sofia Coppola is an actress, director, producer and screenwriter who directed Academy Award-winning screenplay ‘Lost in Translation’. She also directed the films Lick the Star, The Virgin Suicides, Marie Antoinette, Somewhere, The Bling Ring, A Very Murray Christmas, and The Beguiled. Coppola was born in New York City, New York, USA as Sofia Carmina Coppola. She is the daughter of legendary director Francis Ford Coppola. She married Thomas Mars in 2011. They have two children. She was previously married to Spike Jonze. 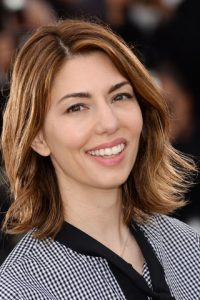 Sofia Coppola Facts:
*Her father is of Italian descent and her mother is of British Isles ancestry.
*Designer Marc Jacobs named a bag after her: The Sofia Bag.
*She lives in an apartment in Manhattan’s Greenwich Village neighborhood.
*She wrote and directed the 1999 film The Virgin Suicides.