Solange Knowles is an American singer-songwriter, model, actress and the younger sister of singer Beyoncé. Solange’s 2016 album, A Seat at the Table, became her first #1 album on the Billboard 200 in the United States. The album’s lead single, “Cranes in the Sky”, won the Grammy for Best R&B Performance, becoming Solange’s first Grammy nomination and win. In 2020, the album was ranked at 312 on Rolling Stone’s 500 Greatest Albums of All Time list. Knowles started her own record label, Saint Records in 2013. 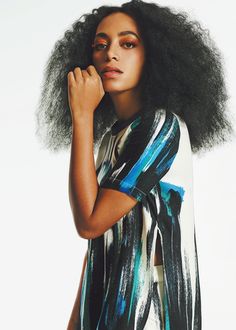 Born Solange Piaget Knowles on June 24, 1986 in Houston, Texas, to Celestine Tina, a hairdresser and salon owner, and Mathew Knowles, a Xerox sales manager, her older sister is performer Beyoncé Knowles. Knowles was married to Daniel Smith from 2004 to 2007 and Alan Ferguson from 2014 to 2019. She has a son: Julez Smith with ex-husband, Daniel Smith.

Solange Knowles Facts:
*She was born on June 24, 1986 in Houston, Texas, USA.
*She is the younger sister of R&B performer Beyoncé.
*She made her singing debut when she was five by performing at an amusement park, and began her musical career at age 14.
*She is also a former backup dancer for Destiny’s Child.
*She launched her own record label, Saint Records in 2013.
*She appeared in Beyoncé’s music video for B’Day and in Bring it On: All or Nothing.
*Beyoncé and Solange are the first sisters to have both had No. 1 albums.
*She has been diagnosed with attention-deficit hyperactivity disorder.
*Visit her official website: www.solangemusic.com
*Follow her on Twitter, SoundCloud, YouTube, Facebook and Instagram.