Sophia Loren is an Italian film actress, who is widely regarded as one of the world’s most beautiful women. Sophia is best known by the public for her role as Cesira in the 1960 film Two Women, for which she won an Academy Award for Best Actress. Her other notable films include Marriage Italian-Style, It Started in Naples, Yesterday, Today and Tomorrow, More Than a Miracle, Sunflower, The Voyage, A Special Day, Prêt-à-Porter, and Nine. She provided the voice of Mama Topolino in the 2011 computer-animated action-adventure comedy film Cars 2. Born Sofia Villani Scicolone on September 20, 1934 in Rome, Lazio, Italy to Romilda Villani and Riccardo Scicolone, she grew up in Puzzuoli, near Naples, raised by her single mother in poverty. She was one of the contestants at the 1950 Miss Italia competition, she earned the second place and was awarded “Miss Eleganza”. She began her acting career in 1950 at age 15. She was married to producer Carlo Ponti for 50 years until his death in 2007. 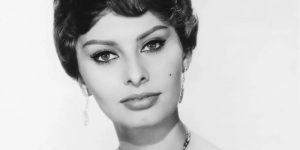 Sophia Loren Facts:
*She was born on 20 September 1934 in Rome, Italy.
*Her father Riccardo died of cancer in 1976.
*She was inspired by American-Canadian actress Yvonne De Carlo to become an actress.
*Became the first actress to win an Oscar for a foreign-language performance.
*She is the recipient of several accolades, including an Academy Award, a Grammy Award, five special Golden Globes, a BAFTA Award, and a Laurel Award.
*People Magazine named her one of the top 50 Most Beautiful People in the World in 1991.
*In 1995, she was placed at #25 in the list of ‘100 Sexiest Stars in film history’ by Empire magazine.
*She quit smoking in 1985.
*Visit her official website: www.sophialoren.com