Allison Williams is an American actress, best known for her role as Marnie Michaels on the HBO comedy-drama series, Girls. She is also known for her role as Rose Armitage in the 2017 horror film Get Out. Her other television credits include Jake and Amir, The Mindy Project, and A Series of Unfortunate Events. Born Allison Howell Williams on April 13, 1988 in New Canaan, Connecticut, USA, she is the daughter of American journalist Brian Williams and TV producer Jane Gillian Stoddard. She has one younger brother named Doug. She attended and graduated from Yale University with an English degree in the year 2010. She has been married to Ricky Van Veen since 2015. 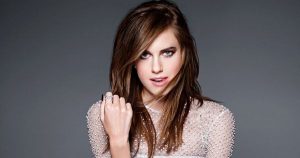 Allison Williams Facts:
*She was born on April 13, 1988 in Connecticut, USA.
*She is a 2010 graduate of Yale University.
*She was a member of the improv comedy troupe Just Add Water for four years while at Yale University.
*In 2014, she was ranked #77 on Maxim’s “Hot 100” list.
*She is obsessed with Duchess of Cambridge.
*Follow her on Facebook and Instagram.