Stacey McClean is a British singer and actress who was part of the S Club spin-off band, S Club 8. In 2009, she participated in the sixth series of The X Factor UK and made it to the Top 6 Girls. Born on February 17, 1989 in Bispham, United Kingdom, to a family of both European and Nigerian heritage, she has a younger brother named Liam, who is ten years younger than she is. She was educated at Beacon Hill High School in Blackpool. At age 12, McClean successfully auditioned for the band S Club Juniors and released four singles and guest starred in Viva S Club with the group. Since June 2017, she has been married to Fraser Franks. They have one child. 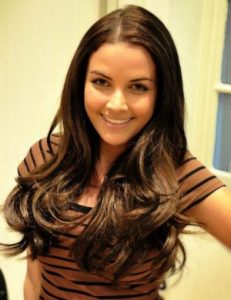 Stacey McClean Facts:
*She was born on February 17, 1989 in Bispham, United Kingdom.
*She was a member of the British pop group S Club 8.
*She took part in the sixth series of The X Factor in 2009.
*She can play the piano and guitar.
*Her hobbies include singing, dancing, acting, hockey and playing with her little brother.
*She worked as an Admin manager at 106.5 Central Radio in Lancashire whilst co-hosting the breakfast show.
*She has a cat called Tigger and two fish.
*In 2017, she married former footballer Fraser Franks.
*Follow her on Twitter.