British comedian, writer, and director who is best known for the television work on series such as Harry Enfield’s Television Programme and Harry & Paul. He is also notable for the creation and portrayal of comedy characters such as Kevin the Teenager and Loadsamoney. He portrayed the role of Dermot in the BBC sitcom Men Behaving Badly and starred with Simon Callow in the film Acts of Gordfrey (2012). Born Henry Richard Enfield on May 30, 1961 in Horsham, United Kingdom, to parents Deirdre and Edward Enfield, he is the oldest of three children, with sisters Sue Elizabeth and Lucy Katherine. He attended the independent Arundale School in Pulborough, Dorset House School, Worth School, Collyer’s Sixth Form College and the University of York, where he was a member of Derwent College and studied politics. He first achieved fame appearing on Channel 4’s Saturday Live as several different characters created with Paul Whitehouse. He is married to Lucy Lyster with whom he has a son Archie Edward and two daughters Poppy Sophia and Nell Enfield. 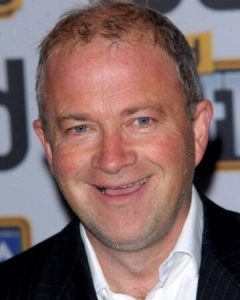 Harry Enfield Facts:
*He was born on May 30, 1961 in Horsham, United Kingdom.
*He is the oldest of three children.
*He studied politics at York University.
*He lived with famed English film producer Alison Owen for five years.
*His father died in February 2019 at the age of 89.