English actress, Stephanie Davis is most famous for her portrayal of Sinead O’Connor in the British soap opera Hollyoaks. She first gained attention when she competed in BBC’s talent search contest Over the Rainbow in 2010. She was born Stephanie Ann Davis on March 8, 1993 in Merseyside, United Kingdom to Pauline Davis and Roy Davis. She grew up in Liverpool. She has two younger brothers. She was in a relationship with Irish model Jeremy McConnell, with whom she has a son named Caben-Albi George Davis. 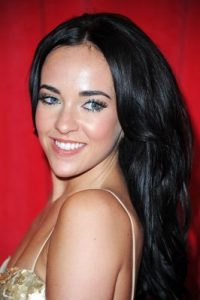 Stephanie Davis Facts:
*She was born in Merseyside and was raised in Liverpool.
*She made her TV debut in a 2007 episode of Holby City.
*She has Tattoos: a giant flower pattern beneath her boobs, three roses on her thighs and 20/10/15 on her wrist..
*She was previously in a relationship with Zayn Malik and Charlie Clapham.
*Follow her on Twitter and Instagram.