Stephen Curry is an American professional basketball player who plays for the Golden State Warriors of the National Basketball Association (NBA) at the Point guard position. Curry played college basketball for the Davidson College Wildcats, and was twice named Southern Conference Player of the Year. He was selected by the Warriors with the seventh overall pick in the 2009 NBA Draft. A seven-time NBA All-Star, Curry has been named the NBA Most Valuable Player (MVP) twice and has won three NBA championships with the Warriors. Many analysts and players have called him the greatest shooter in NBA history. 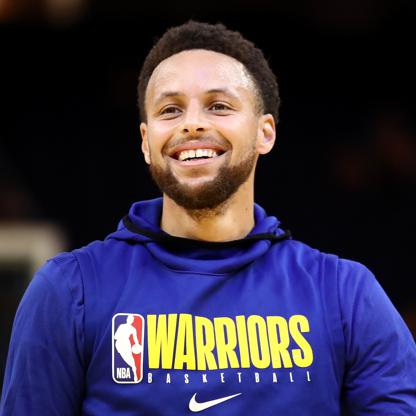 Born Wardell Stephen Curry II on March 14, 1988 in Akron, Ohio, to parents Sonya and Dell Curry, his father played several seasons in the NBA, and his younger brother Seth also became an NBA player. He also has a sister named Sydel. In 2011, Curry married Ayesha Alexander and they have daughters named Ryan and Riley and a son named Canon.

Stephen Curry Facts:
*He was born on March 14, 1988 in Akron, Ohio, USA.
*He is the son of former NBA player Dell Curry and older brother of current NBA player Seth Curry.
*He set the all-time scoring record for both Davidson and the Southern Conference and was twice named the conference’s player of the year.
*He was selected with the seventh overall pick in the 2009 NBA draft by the Golden State Warriors.
*He was voted the NBA Most Valuable Player (MVP) for the 2015 NBA season.
*He was named NBA MVP in both 2015 and 2016.
*He and the Warriors won an NBA-record 73 regular season games in 2015-16.
*He led the Warriors to NBA Championships in 2015, 2017 and 2018.
*Follow him on Twitter, YouTube, Facebook and Instagram.