Steve Harvey is an American comedian, tv host, radio personality and author who hosts The Steve Harvey Morning Show, the Steve talk show, Family Feud, Steve Harvey’s Funderdome, and Little Big Shots and its spinoff Little Big Shots: Forever Young. He starred on The Steve Harvey Show on The WB from 1996 to 2002. He became the first African American host of the long-running American game show Family Feud in 2010. As an author, he published his book “Act Like a Lady, Think Like a Man” in 2009. Born Broderick Stephen Harvey on January 17, 1957 in Welch, West Virginia, USA, to Jesse Harvey and Eloise Vera, his family moved to Cleveland, Ohio. After graduating from Glenville High School in 1974, he attended Kent State University and West Virginia University. 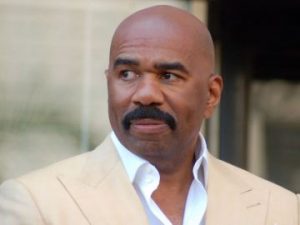 Steve Harvey Facts:
*He was named after actor Broderick Crawford of the TV series Highway Patrol.
*He has been a mailman, a carpet cleaner, a salesman, and a boxer before performing his first stand-up routine in 1985.
*On October 4, 2013, he received the 2,497th star on the Hollywood Walk of Fame.
*Visit his official website: www.steveharvey.com
*Follow him on Twitter, YouTube, Facebook and Instagram.