Steven Yeun is a Korean American actor, voice actor and singer. He is best known for portraying Glenn Rhee on the AMC series The Walking Dead from 2010 to 2016, and as Ben in the South Korean mystery drama film Burning (2018). Steven played supporting roles in the films Okja and Sorry to Bother You. He has also done voice work in Voltron: Legendary Defender, Trollhunters, Stretch Armstrong and the Flex Fighters, Final Space, 3Below, and Tuca & Bertie. Born Yeun Sang-yeop on December 21, 1983 in Seoul, South Korea, to parents June and Je Yeun, he grew up in Troy, Michigan. He earned a bachelor’s degree in psychology from Kalamazoo College in 2005. Following his college graduation, he became a member of Stir Friday Night, a comedy sketch group comprising of Asian-American members. In December 2016, he married photographer Joana Pak. Together they have two children. 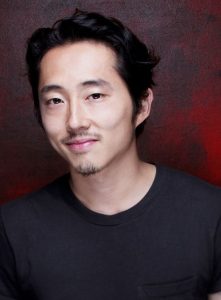 Steven Yeun Facts:
*He was born on December 21, 1983 in Seoul, South Korea.
*His family first immigrated to Canada before moving to Michigan.
*His parents owned beauty-supply stores in Detroit.
*While growing up, he played basketball, hockey, and football.
*He studied Psychology at Kalamazoo College in Kalamazoo.
*Steven’s parents wanted him to become a doctor.
*He is a fan of Detroit Pistons and Detroit Red Wings.
*He enjoys playing guitar.
*Follow him on Twitter, Facebook and Instagram.