Steven Zuber is a Swiss professional football player who plays for German club Eintracht Frankfurt and the Switzerland national team as a midfielder. Zuber previously played for Grasshopper, CSKA Moscow, 1899 Hoffenheim, 1899 Hoffenheim II (loan), and VfB Stuttgart (loan) before joining Eintracht Frankfurt in 2020. He was a member of the Switzerland national team that participated in the 2012 Summer Olympics in London, and was included in Switzerland’s UEFA Euro 2020 squad. 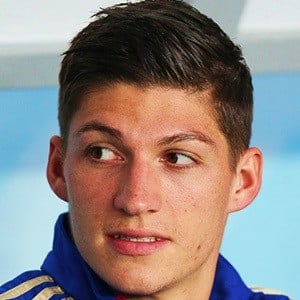 Steven Zuber Facts:
*He was born on August 17, 1991 in Winterthur, Switzerland.
*His parents are Walter and Susanne Zuber.
*He made his professional soccer debut in 2008 for Swiss Super League club Grasshopper.
*He joined Bundesliga club Eintracht Frankfurt in August 2020.
*He married his long-time girlfriend, Mirjana Vasović in May 2015.
*Follow him on Instagram.